With much of the past year spent in quarantine, we’ve all likely had a ton of time to binge-watch a show or two (…or five. Please tell us it’s not just us). But it’s totally been for work, right? We have a tendency to let our love for timeless characters and shows bleed into our work–and we’re not super subtle about it here at Terminus. In the past, we’ve used our favorite characters to inspire some imaginary email signature banners using our Terminus Email Experiences functionality. (See: The Office, Game of Thrones, Parks & Rec, Harry Potter, and a few Marvel Superheroes.) And it was only a matter of time before we drew some inspiration for our latest set of email signatures from our favorite little washed-up Canadian town: Schitt’s Creek.

So, kick back, relax, and get ready for a stay at the Rosebud Motel, because these email signatures are “Simply The Best”.

Johnny Rose is the rational patriarch of the Rose family and a businessman who invests his time helping run the town motel. Once proud of his reputation for spending money as fast as he made it with his business, now his easy-going attitude and good temperament are tested, as he not only tries to rebuild his family’s financial empire but his family as well. But even with his current focus on rebuilding and rebranding the Rosebud Motel, he’s still prioritizing his most prideful accomplishment with his email signature. 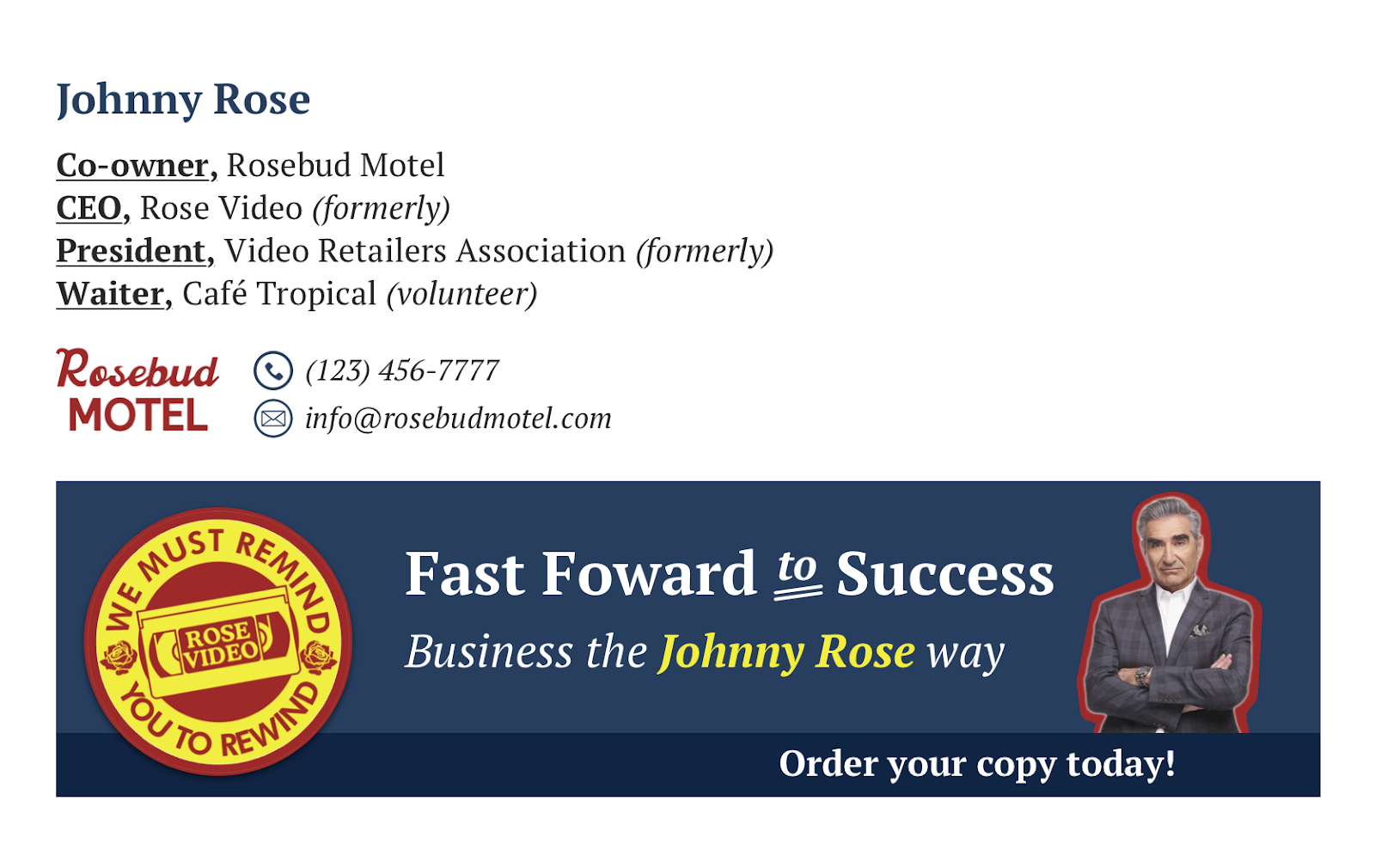 Moira Rose is the dramatic matriarch of the Rose family and a soap opera star of the once-popular soap opera, Sunrise Bay. After receiving her own slap in the face, having lost her fortune and most of her personal belongings (except for an extensive, and expensive, collection of eccentric outfits and individually named wigs), Moira takes a bit longer to warm up to the quaint lifestyle that comes with Schitt’s Creek, but when she finds friendship in her “Jazz-a-Gals” an Acappella group and sees her husband thriving in his new role at the motel, she finds an unexpected love for Schitt’s Creek and even takes on a town council position. Although fond of their slowed-down lifestyle, her email signature proves she’s still the star. 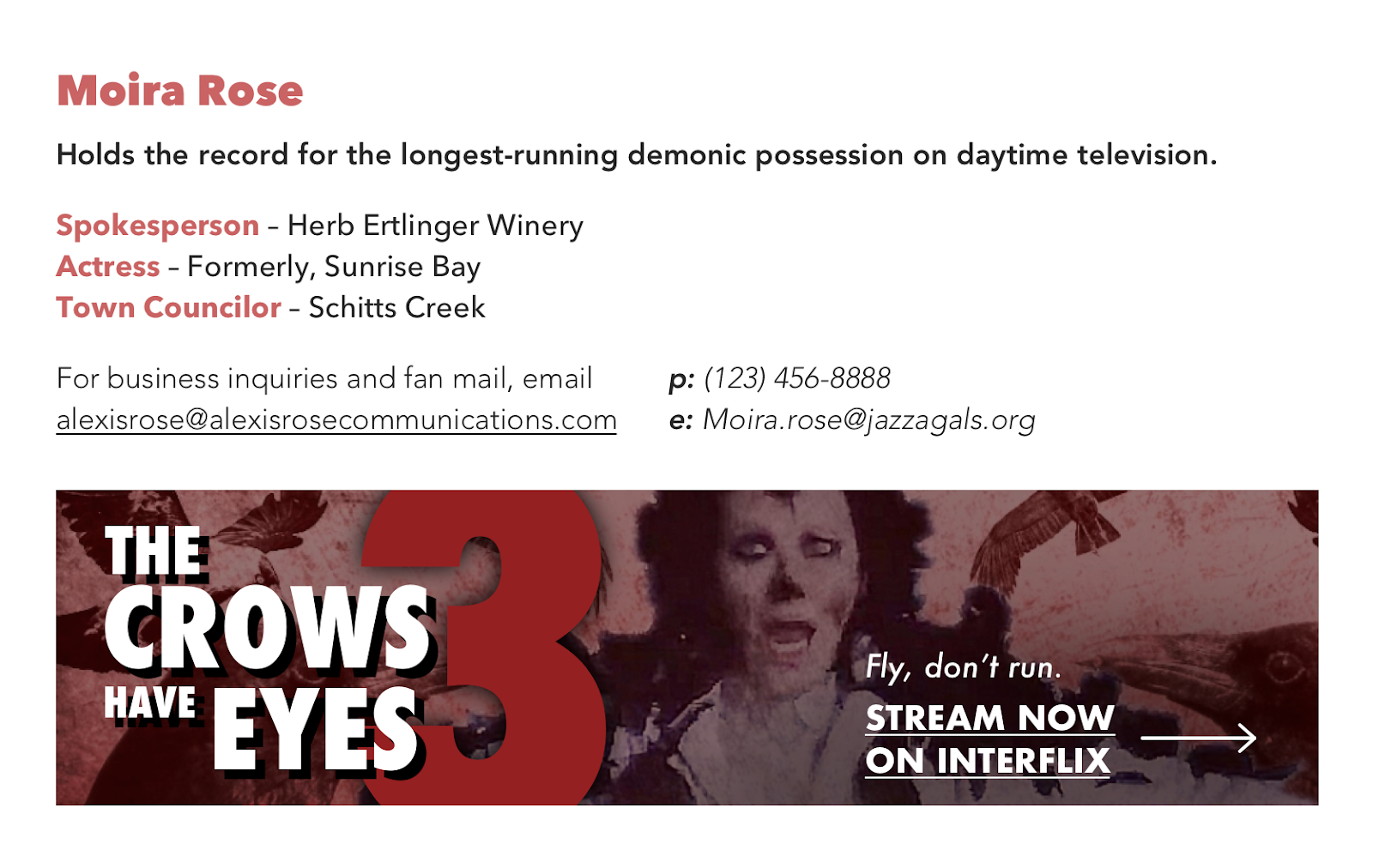 David Rose is the flamboyant son of Johnny and Moira Rose and is the self-described black sheep of the family. But his sarcasm belies a deep knowledge of design and aesthetic, a craftsman’s eye for detail, and an impressive business acumen; all of which he channels into his very own shop called Rose Apothecary. He is most commonly seen wearing an eccentric black sweater, looking at others with a skeptical disdain, and trying to figure out what “folding in the cheese” means. 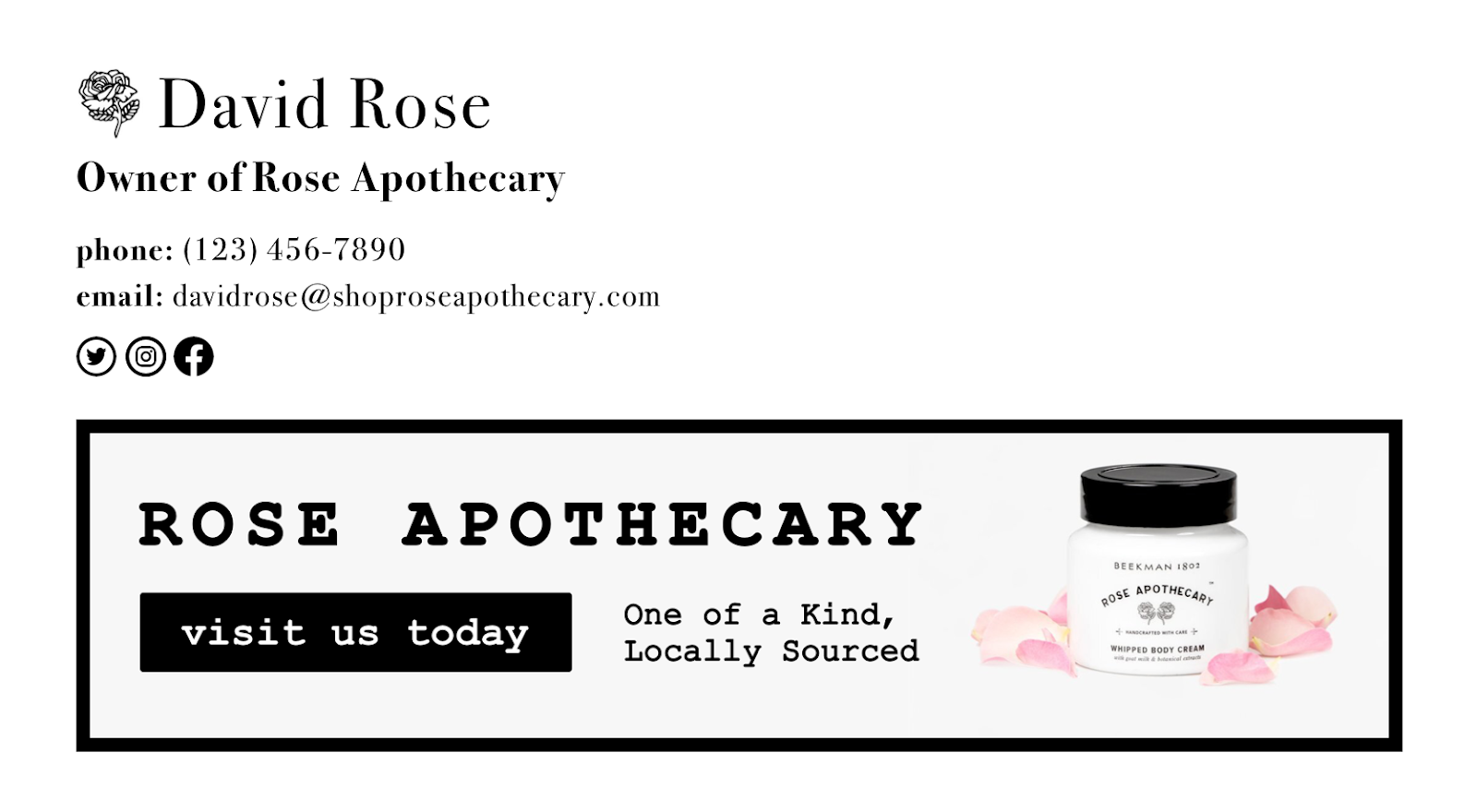 Alexis Rose is Johnny and Moira’s daughter, who struggles to find her calling in life. Prior to moving to Schitt’s Creek, Alexis spent much of her time away from her family in exotic locations around the globe as a teen model and socialite.These escapades were often as dangerous as they were celebrity-ridden, such as the time she was “taken hostage on David Geffen’s yacht by Somali pirates for a week”, or the time she was trapped in a Saudi prince’s palace. Alexis is kindhearted to a fault, which means that she’s often juggling multiple relationships, and she loves to gossip about other people’s lives, but she has nothing but good things to say about herself. You will often catch her drinking a smoothie at Cafe Tropical, saying “Ew, David”, or dancing to her not-quite-hit single, “A Little Bit Alexis”. 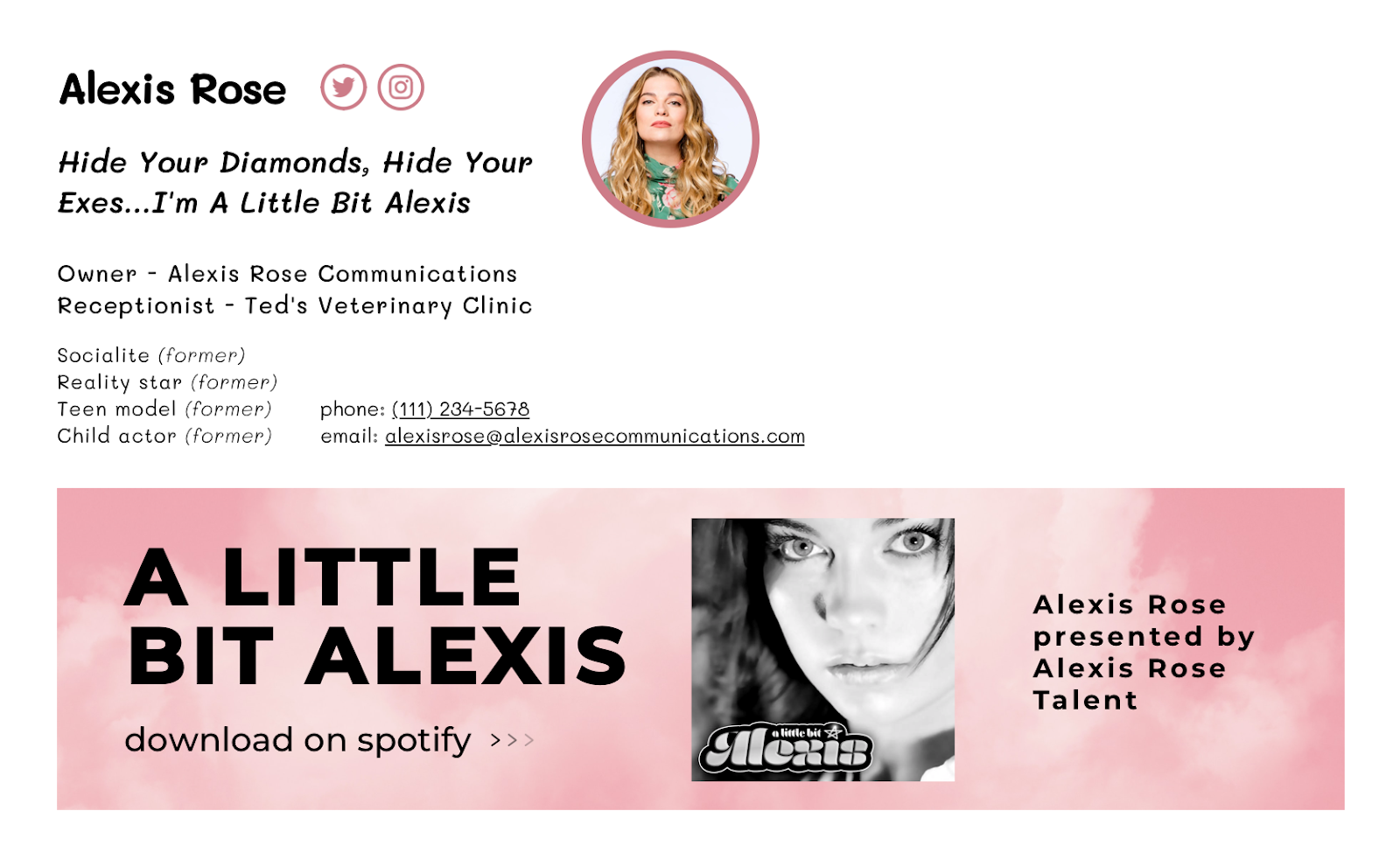 Stevie Budd is a sarcastic clerk and employee at the Rosebud Motel. Having grown up in Schitt’s Creek, Stevie knows far too much about its inhabitants, and the Roses (particularly David) offer a refreshing change of pace from tailgate parties and cow-tipping townies. While Stevie has a penchant for keeping all of her friendships nonchalant and aloof, The Roses bring out a new side of her–encouraging her to take control of the family business, giving her the change to take a risk and lead the town musical as the main character, and showing her that a little vulnerability can pay off in some lifelong friendships. 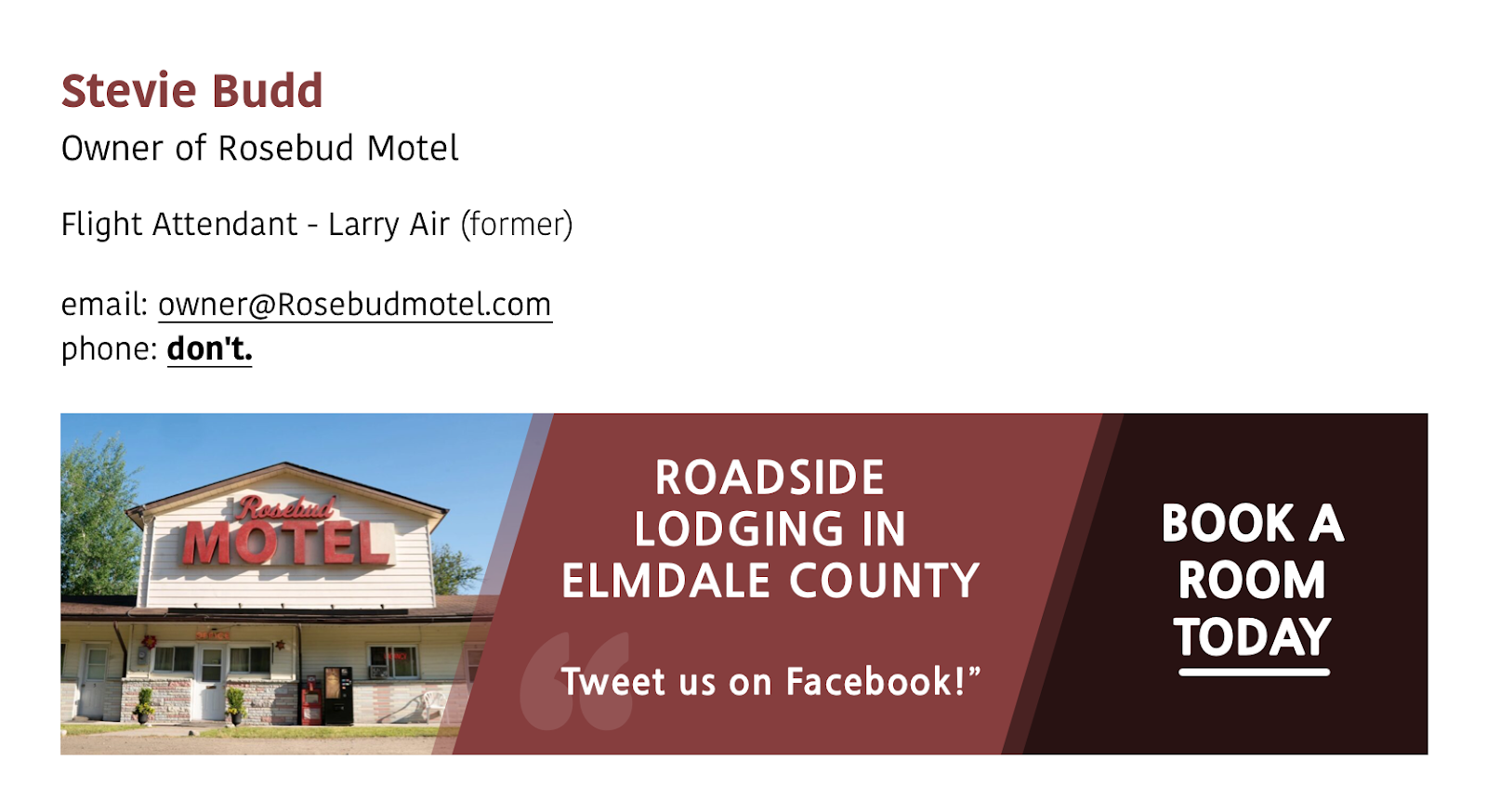 Roland N. Schitt is the eccentric mayor of Schitt’s Creek, and a fourth-generation Schitt. Though not the sharpest tool in the shed, he’s no push over either, and delights in messing with Johnny Rose’s head. With his beer gut and mullet, Roland is Johnny’s white trash nemesis–and, unlikely friend. 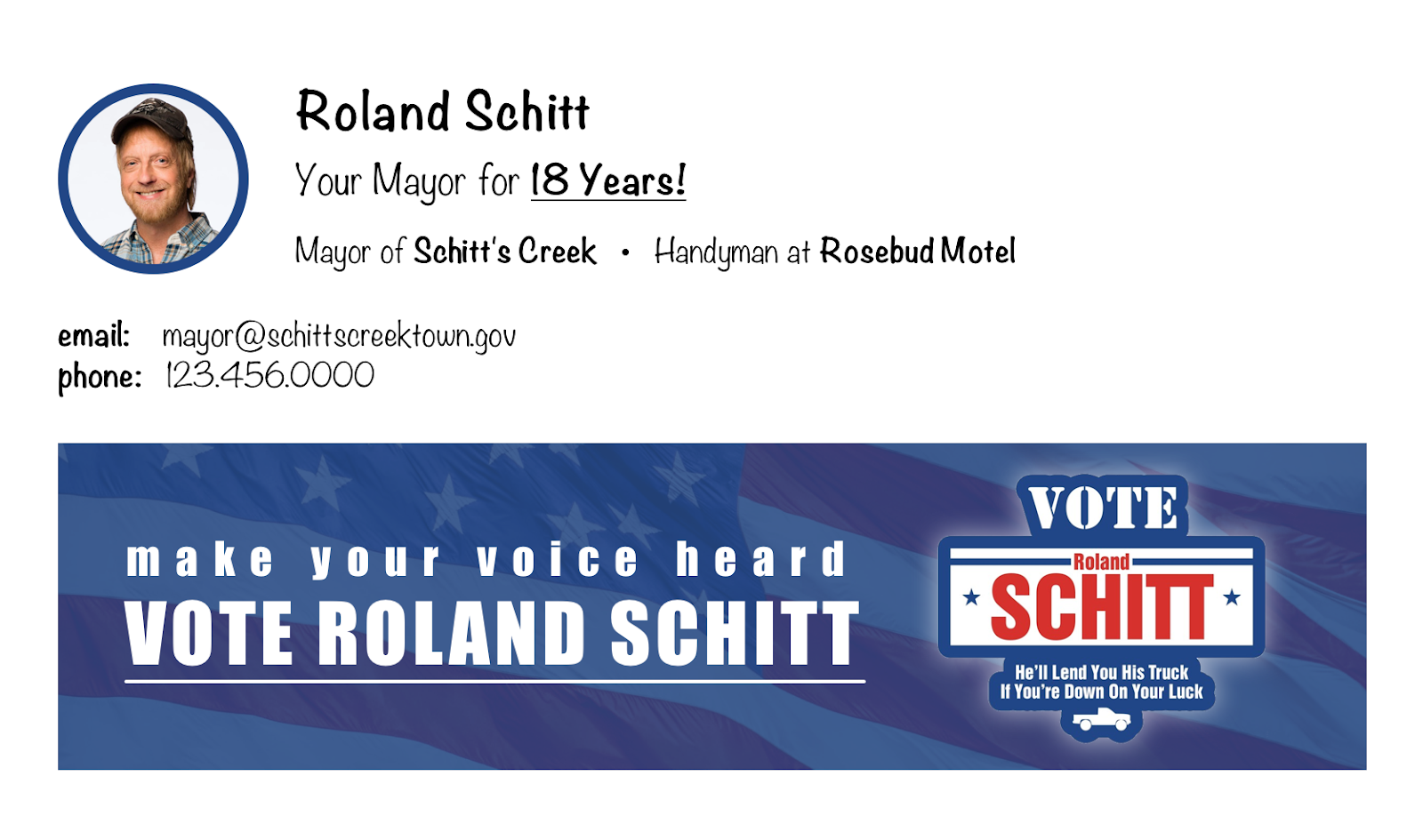 Patrick Brewer, David’s business-partner-turned life-partner, is easily the nicest guy in Schitt’s Creek: David admits that it is new to him to be attracted to someone as nice as Patrick. He is thoughtful, practical, and business-savvy–perfectly complementing David’s creative energy. Think of Patrick as the Johnny to David’s Moira, as he’s definitely the most level-headed person of the younger generation, even though he has his quirks. You can catch him singing a beautiful rendition of “The Best” by Tina Turner at the Rose Apothecary open mic night, or lovingly tending to David’s every need. He really is simply the best.

Dr. Theodore “Ted” Mullens is the town veterinarian and sometimes-lover to Alexis. Though he may seem sweet and cute (and totally ripped–did you see him on that bunny live feed?!), Ted considers himself to be a bit of a bad boy, sometimes cutting his PB&J sandwiches into triangles instead of rectangles or putting tiny hats on the pets when there’s no one else around. Total bad boy. The affable Ted may make a lot of silly animal puns, but don’t let his goofy dad humor fool you; He’s a graduate of veterinary school, runs a thriving practice, and is awarded a prestigious research fellowship in The Galapagos Islands. 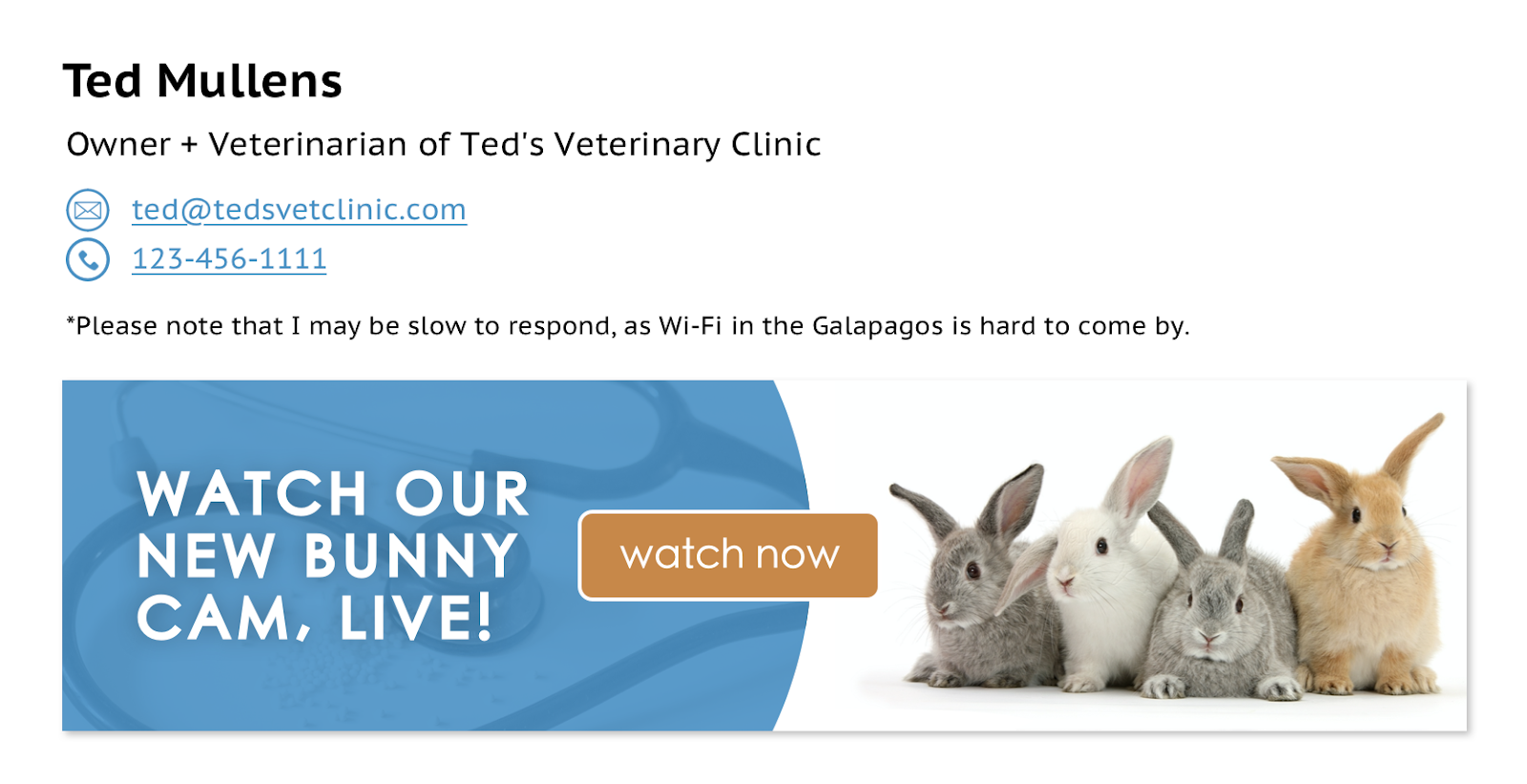 We have a ton of fun making email sigs for our favorite fictional characters, but we also want you to know that there are plenty of use cases for Terminus email signature banners outside of promoting motels, soap operas, and veterinary clinics. Be sure to check out our September Issue for some B2B email signature inspiration.